My favorite kind of date night is the kind where we go out to eat. I don’t have to cook or clean up, and I can just sit and shoot the breeze with the man I love best. I am pretty dedicated to making sure one of these kinds of date nights happens weekly. Julio loves sushi and barbecue and I love Asian fusion, so I assumed for last week’s date night we’d hit one of our favorite places. To my surprise, Julio suggested tacos. Julio does not love tacos and only puts up with eating them a few times a month because I love them so. Corn tortillas, flour tortillas, soft, crunchy, chicken, ground beef, beans, cheese, tomatoes, onions, allllll the salsas and sauces! They are so easy to throw together on busy nights and because they are customizable, I don’t have to listen to my kids whine about how much they hate dinner.  What’s not to love? My refrigerator is a virtual taco shrine—jars of wicked hot salsa stand on doilies of Mission tortillas, flanked by containers of shredded cheese and offerings of tomatoes and heads of lettuce. Hail Tortilla, full of carne asada…

So—why would we go out to a restaurant for something I can make in infinite varieties at home? Because my husband loves me and wants me to be happy.

Julio had heard about this place downtown called Tin Roof Tacos, and thought it sounded interesting, so off we went to the “fast-casual” place on 115 S. Broadway, in Boise. Tin Roof Tacos is located in a small strip mall and the place was HOPPING, like, we had to fight for parking, HOPPING! The line was out the door when we arrived at around 7 PM. Fortunately, the line moved super fast, and the menu for all the Texas street-style tacos and beverages is plastered in large print on one wall, so while Julio waited in line, bantering with the other taco pilgrims and with the friendly staff, I set off to wrangle a couple of seats at one of the long, family style tables packed with college kids and families.

Julio went for broke and ordered one of each of the 14 varieties because they looked small, but really it was because I asked him to.  I figured we could take some home for the kids, but really I meant me.

We ate and ate and ate. We divvied them up, took a couple bites of each, then traded. There is something sublime about tacos and Coca Cola together. It was street food heaven. Fajita chicken, BBQ pulled pork, fried chicken, ground beef, black beans, corn, veggies, steak, brisket, shrimp, and a blizzard of cotija cheese! I am not ashamed to admit we ate alllll the tacos.  I think I heard angels, or maybe it was just The Fitness Marshall videos I turn on to distract Hulk Smash whenever I overindulge. Whatever. We all went away happy. We were too stuffed to consider dessert, but if I had ordered dessert, it would have been more tacos. (Though I hear the rice pudding is delicious.) 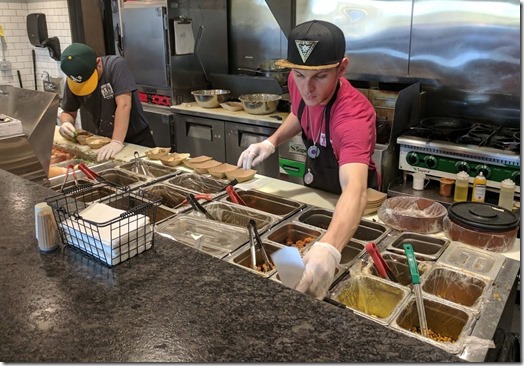 Julio said he was so full that he didn’t think he’d  want tacos again for a year, but surprise! We went back three days later for more (but we stuck to a more reasonable three tacos each, this time. You know, moderation and all that…)

As I write this, I realize that Cinco de Mayo is just a day away, and though it has nothing to do with commemorating the unlikely defeat of French forces by the Mexican army at the Battle of Puebla in 1862, if you suddenly find yourself in Boise, with an urge to celebrate a foreign holiday, Tin Roof Tacos is a good place to start.

Note: This post is an independent, non-commissioned review, and I was not compensated for it.  It’s just me, sharing my taco love.